It seems the sun is setting on Eli Manning’s career as a Giant following his sudden benching as Quarterback. Credit: Newsweek

Probably should add this disclaimer: I’m a New York Giants fan, so biased and a bit emotional as I write. Some of what I write about his benching may be a bit messy through this prism. That said, this is about more than that, it’s a reflection on the career of a fixture in my sports fandom.

I can’t really remember when or how I got interested in American football. Vague memories of the Channel 5 broom-closet studio in the UK with Mike Carlson and others talking about the game before it got to the (relative) level of notoriety it has now in the country with the ever-expanding slew of International Series games. I have vague memories of staying up to watch the Patriots first Superbowl win against the Rams in 2002, so i’ll go with 2001/2. Regardless, something must have grabbed me enough to give it a try, and after getting my head around the basics, I was hooked.

I also don’t know why I chose the Giants as my team. I remember going on a college trip to New York in 2006 though and being desperate to get a Tiki Barber jersey (I ended up settling for Jeremy Shockey, not being able to find a Tiki jersey and, if I remember correctly, choosing between Eli and Shockey – as an aside, having learned a bit more about Shockey’s character, and knowing the kind of guy Eli is, I very much regret that). So maybe it was to do with Tiki, or to do with visiting New York, i’m not sure, but though I clearly liked them before then, it was that trip that cemented the Giants as my team. There probably wasn’t a better time to latch on to a team either, as within two years, they would be winning a Superbowl with Eli at the helm.

It’s easy to both over-estimate, and under-estimate Eli’s role in both Superbowl victories. For me, 2008 was all about Defense, good coaching, and Eli managing the whole thing well while he was, I believe, a more active part of the success in 2011/12 becoming a post-season monster that year. What is clear though is that you don’t win two Superbowls by accident, especially at the Quarterback position, and his achievement in this regard is too often downplayed. The fact that he has won both Superbowls he has played in, and that both were against the Brady/Belichick Patriots makes it all the more remarkable. 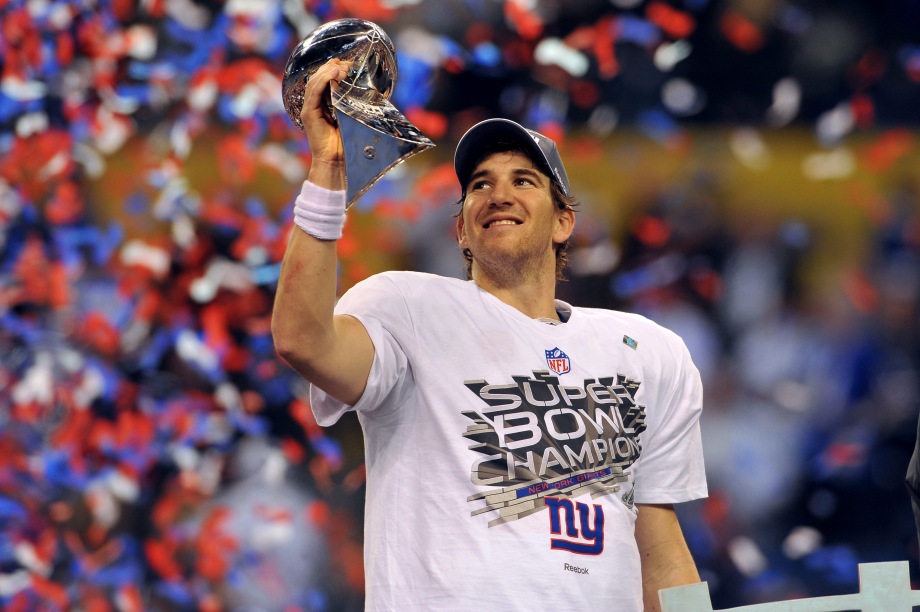 Eli was never one of the very best quarterbacks in the game, and further, was usually not even the best player on the Giants. He alone was not the reason for the Giant’s two Superbowls, especially not for the first one he won, but he was absolutely capable of magic. A smart, steady quarterback, it was often said (to the point of cliche at times) that there were few players teams would want in the post-season more than Eli – something about him could become irresistible at his best. His throws to Manningham and Tyree are the most memorable of course, but there were lots more, as well as the times he’d take it too far and it would end … less well. It could certainly be a roller-coaster.

Manning’s Giants tenure was, in another way though, the opposite of a roller-coaster – his streak of 210 games starting is a remarkable achievement, especially thinking of how common injuries to younger, more athletic players are now. It’s not just remarkable as an achievement for that reason though; that would be more trivia than anything else, but its the aura it brought to him and the team as a whole that was significant. Eli was a constant, a consummate professional, someone to depend on to play and give you a chance. That is something so many teams have lacked chronically in a way that has left them, be they talented or not, without many prospects. He may not have ever been the best, but he was always there, and he was always good. Sometimes great, sometimes not, but always good.

If i’m honest, that magic has indeed been less present in recent years, and talk of Eli being in the ‘back 9’ of his career seemed accurate. At the start of this season, however, the Superbowl window seemed firmly open, and my thinking was this would be the last chance for Eli before retirement. In that context, Eli and the Giants being in the place they are now is … surreal.

Getting to the grimy business of the benching, I probably don’t have much original to say about it. The essence of assessing the talent the Giants have makes sense, but the nature of it is curious. I have time for Geno Smith as a player; I think there have been flashes of talent and that he’s had a hard time of it in his career, but the notion that any sane management team believe he could be the answer at starter next year is patent nonsense. The only player it makes sense to show any significant time to is young prospect Davis Webb, drafted by the Giants in this year’s draft. The fact that Geno is starting and not Webb strongly hints that the coaches don’t feel Webb is ready. If this is the case, Eli should be starting, and therein lies the rub.

The fact that Smith is starting because the QB position must be ‘assessed’ smacks of scapegoating of Eli – it’s why the move is being referred to as a ‘benching’ rather than being part of a true ‘rebuild’ or ‘evaluation’. In the context of the pressure that Ben McAdoo and Jerry Reese are under, it comes across even worse, as them shifting the blame for the seasons’ failings on to a team legend to help save their skins. If the Giants were a playoff team except for the failings of Eli, it might be OK, but Eli is the last person to be the cause of this season’s problems. If anything, Eli has shown a slight upswing in form this year, keeping is tidy and doing what he can (an admittedly limited amount) with a threadbare cast of offensive linemen protecting him and weapons to throw to and compliment him. There are few Quarterbacks who could do significantly better than him if put in the same spot.

Eli with his temporary successor, Geno Smith, and possible long-term successor, Davis Webb, who he has vowed to support through this period. Credit: NY Daily News

Even if we take McAdoo at his word about the intention here, the treatment of Manning, and the position it has put him in is unacceptable and disrespectful to a true legacy player. In it’s sudden, casual nature, it shows a contempt for the team, Eli, and their achievements. Now it must be said that there is some mutuality to this. Eli was informed of plans to let him start and then hand over to Geno in the second half, in order to keep his starting streak going – an offer Eli, to his credit, refused. Of course to a player like Eli though, this was a false choice, not because of egoistic pride, but because it doesn’t measure up as playing to win, and having faith in him to do so. My feeling is that the offer was one that McAdoo and management knew Eli wouldn’t take, and was instead a way to cusion the impact of the move. Again to his credit, fighting back tears in a locker-room interview, Eli promised to help Geno and Davis prepare for games from a backup role. I won’t pretend to know much about Eli as a person away from the game, but everything I do know about him in the context of the Giants screams that he is a class act. That this is likely the way his Big Blue career ends belies all of that, and those responsible should be held to account.

The sheer shock and dismay (sometimes furious in nature) of Giants legends and former team-mates like Victor Cruz, Justin Tuck, David Carr, Osi Umenyiora, Shaun O’Hara, many more, and even players who never played with him like Carl Banks show what a class act Eli was for the Giants, and how respected he is and always will be. This feels like a big blow for the whole organisation, one that might have a long-lasting legacy, and a black mark on a team and ownership which is usually held up as a classy outfit. That John Mara allowed this to happen and agreed to it when he wasn’t even present to talk to the parties involved makes it all the worse.

Up until today, I presumed, with good reason, that Manning would be a ‘one man, one club’ guy and retire a Giant. He still may, but it has never seemed more possible than now that we could see him in new colours, perhaps those of Jacksonville, reuniting with Tom Coughlin. If Eli does move on, as long as he doesn’t play for a rival team (I suppose Washington would be the only possibility there, and that seems unlikely), I will pull for him. Given an offensive line, he still has a lot to offer, and I would like him to show it, not as revenge against the Giants, per se, but to show those responsible for this debacle, and also because I certainly wouldn’t grudge him one more success.

To end this on a more positive note, I come to the question that has followed Eli for years: the Hall of Fame. Now I know his career isn’t necessarily over yet, and people have different definitions of what a Hall of Famer is, or should be, but I think I can put this frankly, and briefly. To me, the Hall of Fame should be based on a mixture of the success and significance of the player in question. A Hof-er shouldn’t need a Superbowl ring, but if they don’t have one, they had better have been spectacular otherwise to get in. For me, I’ve already stated that Eli was never the greatest quarterback, but he is a two-time Superbowl winner and MVP, both times defeating that Patriots, who have never been otherwise beaten in the Superbowl with Brady and Belichick, and who were otherwise undefeated in one of those seasons. Not only is he a two-time Superbowl winning quarterback, but he defeated significant opponents both times. He is in the top 10 of all time for passing yards and touchdowns, he was a true ‘ironman’ playing 210 consecutive games, a Walter Payton ‘Man of the Year’ winner, and was one of the most recognisable figures in the game. If you don’t think that is Hall of Fame worthy, I don’t know what to tell you. See you in Canton, Eli.

A final, more personal note, as this blog might make obvious, the role of sport in everyday life fascinates me, and even nourishes me, and I’m suddenly faced with some questions I didn’t expect. The NFL and the Giants are happily acquired tastes for me in a way that football isn’t; football is something I was practically born with. Because of that, I don’t think I’ve ever been in a situation where one single person has been so closely linked with my enjoyment of a sport. Eli was always the central figure in my NFL fandom. The respect and love for Eli that I have will always be there, but given the nature of this event, and the lack of a figure to fill the Eli void, I can’t help but wonder how it might affect the nature of my following of the Giants. I suppose i’m about to find out.